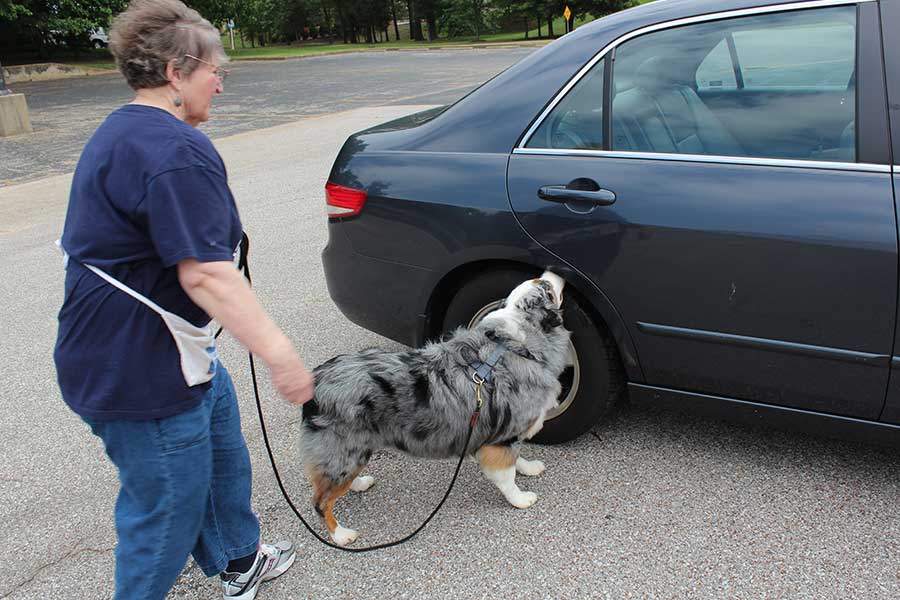 Fear has been defined as “an unpleasant emotion caused by the belief that someone or something is dangerous, likely to cause pain, or a threat” according to Oxford Dictionaries. Dr. Karen Overall, in Manual of Clinical Behavioral Medicine for Dogs and Cats, further defines fearful behavior in dogs as “responses to stimuli (social or physical) that are characterized by withdrawal; passive and active avoidance behaviors.”

In the home, with people the dog has learned he or she can trust, the dog can be a dog. When we take our dogs to places they have not been, the signs are there. The dog no longer feels safe and their confidence goes out the window. These dogs often shut down and do not even attempt to investigate their surroundings, especially if they are on the far end of the fearful spectrum.

Sadly, these dogs often do not do well in a group class. They are unable to overcome their fear and participate in the class.

A new class has become popular over the last 10 years. Three professional canine detection dog handlers developed K9 Nose Work. Their goal was to give dogs and their humans a fun activity that helps the dog learn to utilize his or her olfactory abilities to pinpoint a scent source. Dogs begin looking for their favorite food hidden in boxes. Hides become more challenging as a variety of environments are used: boxes, containers, outside, inside, and vehicles. The scent source is changed from food to an odor. When dogs compete in K9 Nose Work trials, they are looking for three target odors: birch, anise, and clove.

Some benefits of K9 Nose Work include:
• Mental stimulation and physical exercise
• No prior training or manners behaviors required
• Can be done anywhere
• Fearful, shy and even reactive dogs can participate because only one dogs works at a time
• Reactive dogs focus on the search
• Fearful or shy dogs gain confidence
• Builds a stronger bond between dog and their human

As a professional dog trainer, I have clients whose dogs are fearful. They want their dogs to be able to enjoy life and participate in activities without being afraid. What a joy it has been for me to be able to offer Nose Games classes.

Clients love watching their dogs learn to use their nose to follow scent to its source. Over the past year and a half, I have so enjoyed watching dogs fine-tune their skills and owners learn to read their dogs. As much pleasure as this as brought to me, it paled in comparison to watching one dog take the beginner class recently.

Gus, a fearful dog who could not even go near a box, blossomed into a dog that found the scent first on paper plates, then in bowls, then in boxes. As he realized a box wasn’t so scary, he also learned to use his nose. Seeing him move in a pattern suggestive of following scent, I was brought to tears. Karen, his human, was smiling from ear to ear. Another student remarked that Karen was always smiling after Gus’ run, beaming with pride.

With each class, Gus came in more and more confident. He still appeared worried when moving past a wheelbarrow or barbecue grill, but now he could walk around the room, full of boxes, and use his nose looking for scent. It was beautiful to watch.

Pixie and Valentino, two sibling rat terriers, had confidence issues coming into the class. Over the next 6 weeks, both made excellent strides. Pixie exuberantly came into class, even going up to people that initially produced anxiety and stress. Gail, Pixie’s human, enjoyed watching her joyfully go to work and find sources low and high. Valentino was the more timid of the two. When the course began, he hesitated to leave the side of his human, Terri. It was not long before he walked with confidence through the area, finding the source, getting reinforced, and then triumphantly moving on.

It was such a joy teaching this class. Watching dogs learn to enjoy the class while gaining confidence and seeing the happiness and pride on their humans’ faces is priceless.

For those with fearful dogs, think about games that allow them to use their nose. It is a wonderful way to help them gain confidence and have fun in the process.