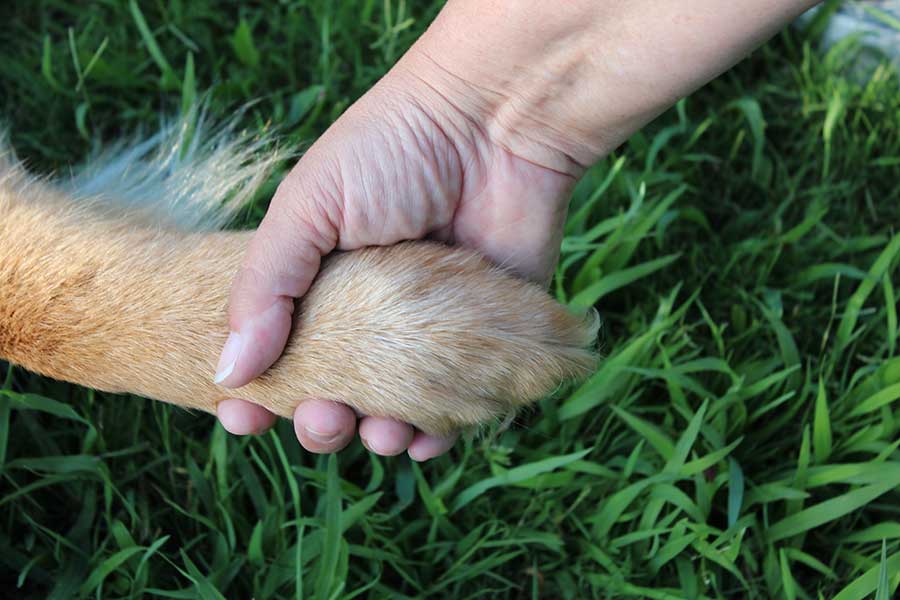 I met Bailey, though he was named Chewy at the time, when I began dog walking at the old Humane Society off of Central. He was kenneled with Badger. The two were best buds, and playmates to many dogs that enjoyed a trip down Central to the small play yard behind the building that housed the cats. It was surprising that no one wanted to adopt him, although his larger size may have been a contributing factor.

One day a lovely couple chose to adopt Chewy. As I was leaving I offered to help them in any way I could with their new family member. I believe subconsciously I already knew the path I was embarking on at the time, though I did not consciously see becoming a dog trainer in my future.

It was not long before they called me, telling me that Chewy hid under their bed, was afraid of the vacuum, noises, taking walks, etc. When I found out they had grandchildren, I strongly advised them to keep the children away from him, as I learned that Chewy came to the shelter with his mom and very young littermates. He grew up at the shelter. Thus his socialization was narrow at best – adults, other dogs, two walking routes, and little more. Without good positive experiences to as many aspects of our world as possible, he was a fearful dog. Unfortunately one of their grandchildren tried to interact with Chewy and he mouthed her arm. As a trainer I know that is a Level 2 bite on the Dunbar bite scale. The couple did the responsible thing and surrendered Chewy to the shelter.

For those of you familiar with my website, you know that I changed the methods I use to work with dogs because of Chewy. Changing his fearful emotional association to my van by pairing the van with chicken was all it took to change my mind of what training methods I would use and to convince Chewy that he needed to come home with me. And so he did.

I changed his name to Bailey, after my favorite movie’s main character, George Bailey in It’s a Wonderful Life. Little did I know that Bailey would give me a wonderful life.

For the next 11 years he gave me his heart and soul, his trust, and constant companionship.

Trust began with changing his fear of my van. It continued as we battled epilepsy. My sweet boy had grand mal seizures, which left him blind and confused after each one. Together we learned a routine that helped him and after 8 years he was finally seizure free. Though there is no scientific reason for the following supposition, I do have to wonder if the viral infection he had as a young puppy, presumably parvo, affected him in other ways. This sweet boy would be diagnosed with an obstruction requiring surgery, hemolytic gastroenteritis, Cushing’s, degenerative myelopathy, and finally immune mediated hemolytic anemia. They say cats have nine lives. I have to believe that Bailey had several, thanks to the wonderful care of vets at Southwind Animal Hospital and Memphis Veterinary Specialists. Through it all, his spirit never gave up, but his body eventually did. I lost my sweet boy earlier this year.

Bailey was a special boy. He was able to read other dogs’ body language and respond in a way that was non-threatening to them. He was the perfect neutral dog. He helped with puppy class, allowing cautious puppies to come up and sniff his back end. He did not play but was great at letting puppies know what was allowed and what was not, including sliding into him. His vocalizations could be translated to “watch where you’re going, would you!” Weather permitting, he was my constant business companion, being happy to just wait in the van until I returned and then giving me his paw to hold, a gesture he did all the time.

There is not a day that goes by that I do not miss my sweet boy. I am forever grateful for the time I had with Bailey. He will always hold a special place in my heart. And I have to say, there are times when I get up in the middle of the night and I see him lying on the bathroom floor as he often did, letting me know he is always with me.