Ann Marie Easton is a Certified Professional Dog Trainer – Knowledge & Skills Assessed (CPDT-KSA) and Pat Miller Certified Trainer (PMCT), and Certified Fear Free Pet Professional. Ann Marie also has a PhD in microbiology and immunology from the University of Alabama at Birmingham, and is uniquely skilled at applying scientific principles to dog training. 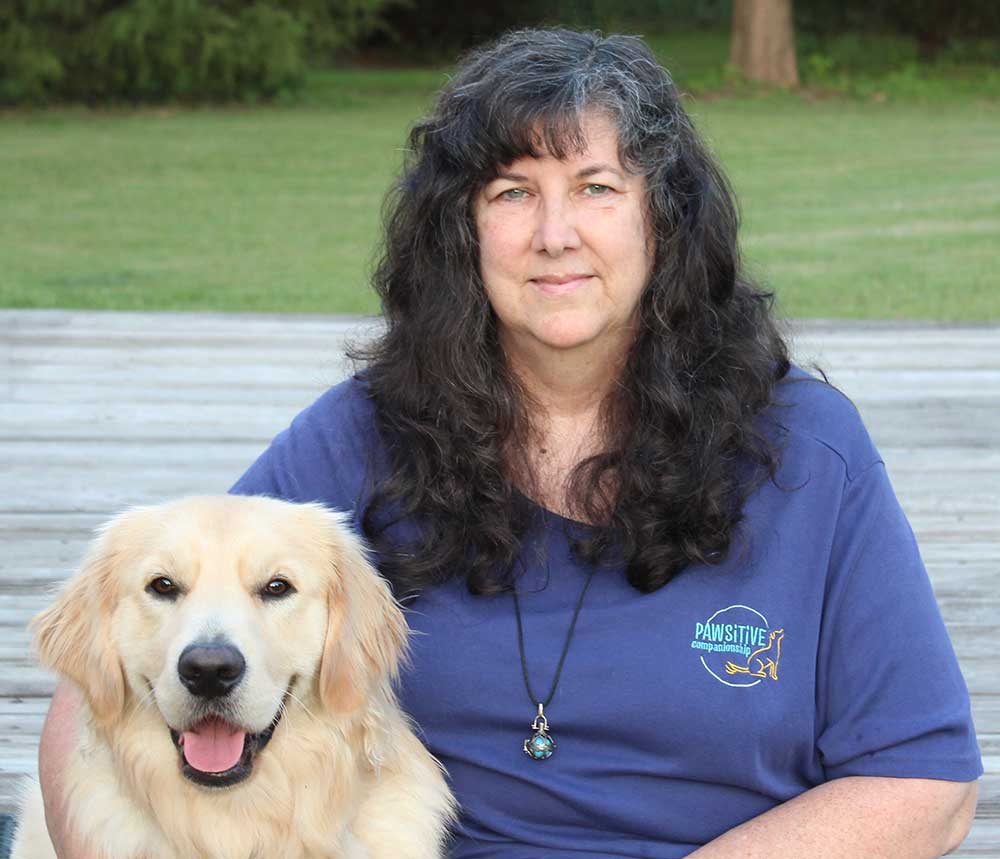 As a scientist, Ann Marie embraced the positive reinforcement school of dog training because it is based on decades of scientific research. But as an animal lover, she was drawn to positive training because it effectively improves dogs’ behavior without punishment. Both people and dogs enjoy this learning process, and Ann Marie’s clients ultimately enjoy better-behaved dogs.

Before starting Pawsitive Companionship, Ann Marie earned her dog training chops assessing dogs for Memphis Animal Services and the Humane Society of Memphis and Shelby County. She was also the lead instructor of basic family manners dog training classes at The Dog’s Day.

Dog training is an unregulated business making your choice of a dog trainer no easy task. Ann Marie chose to further her education and acquire certifications from organizations considered to be at the top of the dog training profession. Ann Marie knows that since dogs are part of the family, their caregivers want their education to be with someone they can trust. That’s why choosing a Certified Professional Dog Trainer and Fear Free Professional is the right choice.

Ann Marie continually sharpens her dog training skills through continuing education and professional development by regularly attending workshops, classes, seminars, and conferences offered by leaders in the dog training and behavior fields. She actively participates in the local dog training community as a mentor for Animal Behavior College or CATCH Canine students, is an official Canine Good Citizen evaluator, has worked with volunteers and staff at the HSMSC to modify the shelter’s dogs’ behaviors, regularly speaks at the annual Train Your Dog Month public seminar, and founded Positive Dog Trainers of the Mid-South, a network of dog trainers in the Memphis area who meet monthly to discuss dog training and behavior. She has served as an assistant at a Pat Miller Peaceable Paws Reactive Rover workshop, served as a beta tester for the IAABC Animal Behavior Consulting Principles and Practices course, and completed the Karen Pryor Academy Puppy Start Right course, Dr. Susan Friedman’s Living and Learning with Animals course, and Michael Shikashio’s Aggression in Dogs course.

Ann Marie’s specialties include nurturing puppies into well-mannered adult dogs, helping reactive dogs (and their long-suffering owners) actually enjoy being around other dogs, and training dogs to be great family pets. She has loved dogs her entire life, and truly loves professionally coaching people to train their dogs to become happy, full-fledged family members.

Ann Marie shares her home with her husband John and their golden retriever, Hygge, who assists her with puppy classes, training videos, and behavior modification for leash reactivity.

About Bailey — My Canine Inspiration

I was a volunteer dog walker at the Humane Society when first I met Bailey. Such a sweet, friendly dog. Unfortunately, he hadn’t been properly socialized as a puppy, so his adopters returned him to the shelter complaining he was fearful and reactive on walks.

Bailey clearly deserved a stable, permanent home where he’d be appreciated and happy. But I knew that without effective training, his chances of finding one were slim – so I began working with him. I’d just started studying professional dog training at Peaceable Paws Academy, which teaches a reward-based “counter conditioning” approach using positive reinforcement. I’d also seen another more control-based training technique used on a “reality” TV show. So, as a trained scientist, I decided to do a little experiment: test both methods to see which one worked better.

I first tried the television trainer’s method, which involved use of force. It did not go well. In fact, Bailey’s fear increased. Then I tried Peaceable Paws’ method, which relied on a positive approach to overcome fear – and Bailey was soon doing things he’d previously feared to do.

It was not long before I adopted Bailey. Within a month of joining my family, he was diagnosed with epilepsy. Taking care of Bailey has given me firsthand experience, and a very personal perspective, on living with a dog who has issues, whether behavioral or medical.

Throughout his life he assisted me with puppy classes, gently letting puppies know when they went too far, and acting as the neutral dog when working with dogs who were reactive on leash. I am indebted to Bailey for all he taught me and I miss him still.